Beckers Vietnam is proactively working to breakdown the cultural barriers that women face in Vietnamese society to promote a more gender-balanced organisation with reduced inequalities. The team in Vietnam won the 2021 Beckers Sustainability Award People with Impact for their work with equality.

“Vietnam is traditionally a patriarchal society, which means that women typically have lower salaries and less opportunities in the workplace,” explains Danial Azfar Zow Bin Abdullah, General Operations Manager at Beckers Vietnam. “We have several ongoing social engagement projects that we develop and implement together with our team, and we chose discrimination as one of our focus areas in 2021.”

Beckers Vietnam’s approach is in line with the Beckers Group objectives to create inclusive and gender-balanced workplaces.

“Our main objective in 2021 was to raise employee awareness of what discrimination is as awareness was quite low among some of our employees, especially frontline production staff,” says Abdullah. “We also worked to highlight and help overcome other forms of discrimination in Vietnam, such as between people from the North and South of the country.”

In March 2021, Beckers Vietnam conducted a half-day zero discrimination workshop at both of our sites in Ho Chi Minh and Nghe An that involved almost all 74 Beckers employees in the country. In the workshop, all colleagues openly discussed the challenges of discrimination faced by woman and girls in society.

“The workshop helped to raise awareness of the issues and highlighted what individuals could do to overcome their unconscious biases both in the workplace and in Vietnamese society in general,” says Abdullah. “After the workshop, all the participants signed a board to commit to zero discrimination both in their work and private lives.” 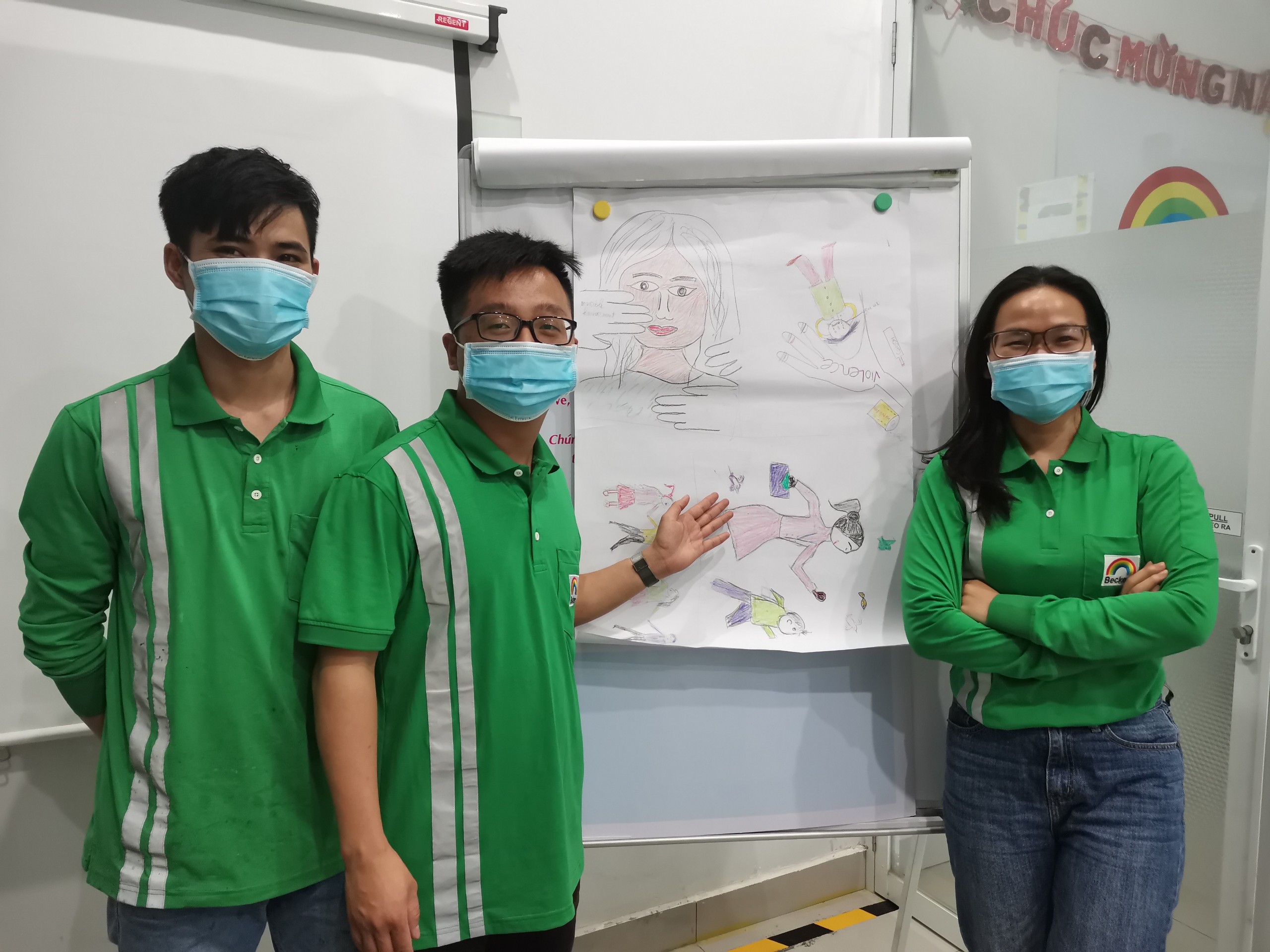 The workshop included a painting competition with the “Zero Discrimination against women and girls” theme aimed at flagging issues as well as highlighting what individuals can do to overcome their unconscious biases. Each team presented their painting subject.

Promoting change throughout the organisation

“As well as raising awareness among all our employees, we are working to change the mindset of our managers,” says Abdullah. “By ensuring that our managers lead by example and are role models for other employees in terms of non-discrimination, we can promote cultural change throughout our organisation.”

We have improved gender equality in our operations in Vietnam in recent years as we work gradually towards the Beckers 2030 Sustainability goals to reduce inequalities. This includes the goal to employ 40 percent female employees for new positions.

“Recruitment is key and we work actively to employ more female employees and managers,” says Abdullah. “We still have work to do in recruitment, but I am currently looking to recruit a female Production Manager and am investigating the potential to recruit a female forklift driver for example. 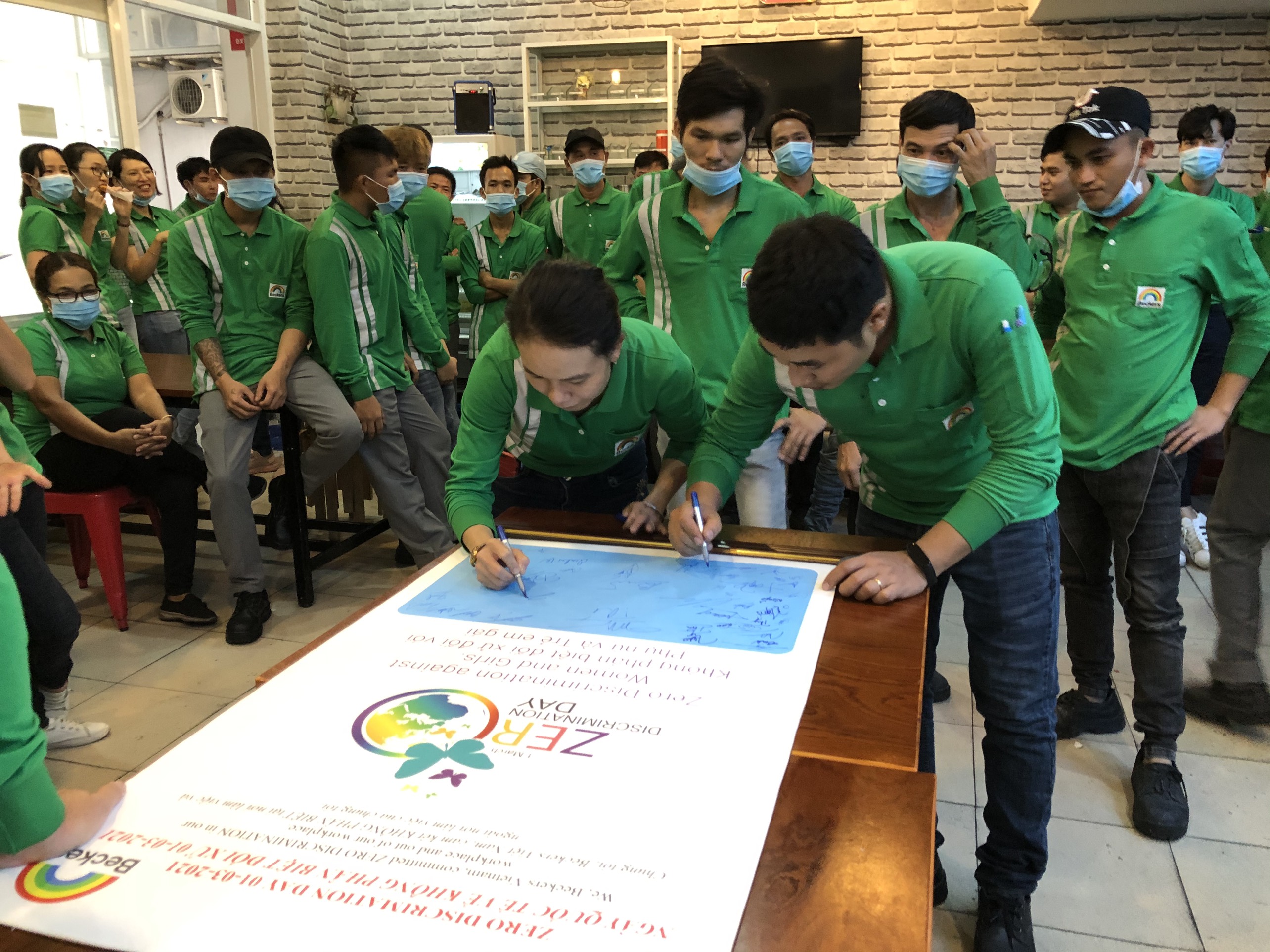 At the end of the workshop, all employees signed a board to commit to zero discrimination both in their work and private lives.

In February 2022, the Beckers Sustainability Council awarded the team in Vietnam the Beckers Sustainability Award in the ‘People with impact’ category for their proactive approach to address and eliminate discrimination in Beckers Vietnam. The jury particularly liked the inclusive, proactive approach and the transferability of the project. “It is one thing is to declare an anti-discrimination policy, it is another to raise awareness and help create understanding for the challenges women and girls face on a day-to-day basis. We need more of that”, say Judith Jungmann, CHRO.

The Beckers Sustainability Awards were founded in 2017. They are designed to recognize and reward projects and colleagues who add real value toward reaching the goals of our 2030 Sustainability Strategy.